Randall Student Council has organized their first fundraiser, Pennies for Patients. Each classroom will be competing to see how much money they can raise. The class with the most money will win a pizza party! You can bring in money to your classroom or donate online at this site: http://wi.sy.llsevent.org/RandallElementarySchool. At this site, you can enter in which classroom you would like your donate to count for. So pass this website along to family and friends!

“Since 1994, millions of dollars have been raised in pennies and other spare change by more than 10 million elementary, middle and high school students throughout the country. The funds, collected during a three-week period, benefit The Leukemia & Lymphoma Society. Everyone who participates is a winner!

Students across the country are collecting pennies, nickels, dimes and quarters during the Pennies for Patients campaigns benefiting the Society.

In the Pennies for Patients campaign, the class collecting the most change in each school receives a pizza party. Prizes such as computers, electronics and sports equipment are presented to the top schools in each area.”
Officially, Pennies for Patients kicked off today. You can donate now through November 21st! Winners will be announced the Monday after Thanksgiving.
Our all school goal is $650. I know we can do it!

My little brother grew up with a kid named Ben. Ben and my brother were best friends from Kindergarten and they still are. They are 2 and a half years younger than I am. I remember Ben running around my house as a 6 year old. He was at my house so often, he was like having another little brother. They are now both 26 years old. Ben was at a Brewer game a few years ago and got a cut. It wasn’t a bad cut and he didn’t think much of it but it didn’t go away like normal, everyday cuts and he got REALLY sick so he went to the doctor to have the doctor look at it. The doctor told Ben he had Leukemia. Ben started chemotherapy and after a long hard road, his cancer went into remission which means it wasn’t as bad as it was before! But it wasn’t gone. Ben’s doctor told him he needed a bone marrow transplant to live. His insurance told him that they would not pay for him to have this life saving surgery so he ended up not having the surgery and going through more chemotherapy and drug treatments. Then his cancer came back in full force and he had to have the surgery whether or not it was covered by insurance. So Ben’s family and friends started fundraising. They also all had themselves tested to see if they were a match and could give him some of their bone marrow. No one was a match and no one in the United States that had been tested and giving their information to the national registry was a match. Ben and his family and friends were scared. The doctor suggested they use something called cord blood instead of bone marrow and then they found a match. He had the surgery and was also on chemotherapy while he was recovering. The radiation and the surgery was successful! Ben continued living his life and got a job in 2011. His brush with death motivated him to fulfull a dream of his that he’s had for a long time, to go to EVERY Brewer game both home and way in one season. He quite his job, went to every Brewer game both  home and way in 2012 and along the way, brought attention to the need for people to register for the national registry of bone marrow, Be The Match.

Ben recently took the last year off of work after saving money to go to every Brewer game home and away to bring attention to the Be The Match program. He blogged his entire experience here. Read about how he found out he had Leukemia here. Be The Match Foundation® raises funds to help provide marrow and umbilical cord blood transplants to patients with leukemia, lymphoma, sickle cell anemia and other diseases. Be The Match® is operated by the National Marrow Donor Program®, a nonprofit organization that educates healthcare professionals, conducts research and matches donors with patients. Thousands of patients depend on Be The Match Foundation to raise funds to grow our registry and make life-saving transplants a reality. 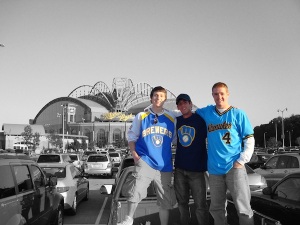 That’s Ben there on the left. My brother, Dustin, is in the middle and his friend Adam is on the right.

Randall kids can make a difference!

Update: Randall kids exceeded their goal of $650. They raised $930.61!!! The winning classroom (who will be getting a pizza party) will be announced on Monday morning.